KIB sees a beautiful Indianapolis that is loved, cared for, and ecologically rich. A city defined by strong neighborhoods, inspired places, and a clean, flourishing environment. KIB will engage and empower people to improve environmental equity throughout the city.

In February 2021, the Board of Directors of Keep Indianapolis Beautiful (KIB) approved the organization’s next Strategic Plan, covering the next four years (2021 – 2024). The guiding principle of this plan is a focus on improving environmental equity in Indianapolis.

A data-driven analysis has shown that some neighborhoods in Indianapolis have access to fewer environmental benefits like trees, green space, and clean streets than others. KIB will work alongside residents to thoughtfully deploy resources that aim to improve equitable access to these benefits.

Equitably improve access to environmental benefits so people can thrive in nature.

Expand opportunities for input from neighborhoods to influence how and where KIB allocates its resources to improve environmental equity.

Broaden knowledge of KIB programming among neighborhood residents and partners.

Diversify sources of annual revenue to allow for more resources to be allocated in neighborhoods that need and want them most.

Keep Indianapolis Beautiful has developed a Key Neighborhood Identification Tool (KNIT) to help us identify neighborhoods in the city where KIB resources can have the greatest positive impact. Using this tool, KIB has identified 10 Focus Areas where social vulnerability is highest, tree canopy coverage is lowest, litter is highest, and KIB’s past involvement and use of resources has been lowest.

Many of KIB’s programs are largely driven by specific contracts and community applications. Focus Areas, as defined by KNIT, are where KIB aims to build relationships and trust, and begin to implement programs in cooperation with neighbors, to collectively make a lasting impact toward a more environmentally equitable city.

The geographies of these Focus Areas are determined by using data from the U.S. Census. KIB uses Census Tract data because their areas approximate the size of a neighborhood, and their borders tend to have simple and basic geometry.

The KNIT Score consists of four major components. All Census Tracts are assigned a rank for each component, and the sum of the rankings is the KNIT Score. The components are as follows:

The KNIT Map below highlights the areas that have the highest overall KNIT Score. These Focus Areas will be where KIB will focus on deliberate relationship building and community engagement in the hope that the organization can work with community members to put KIB resources to use. 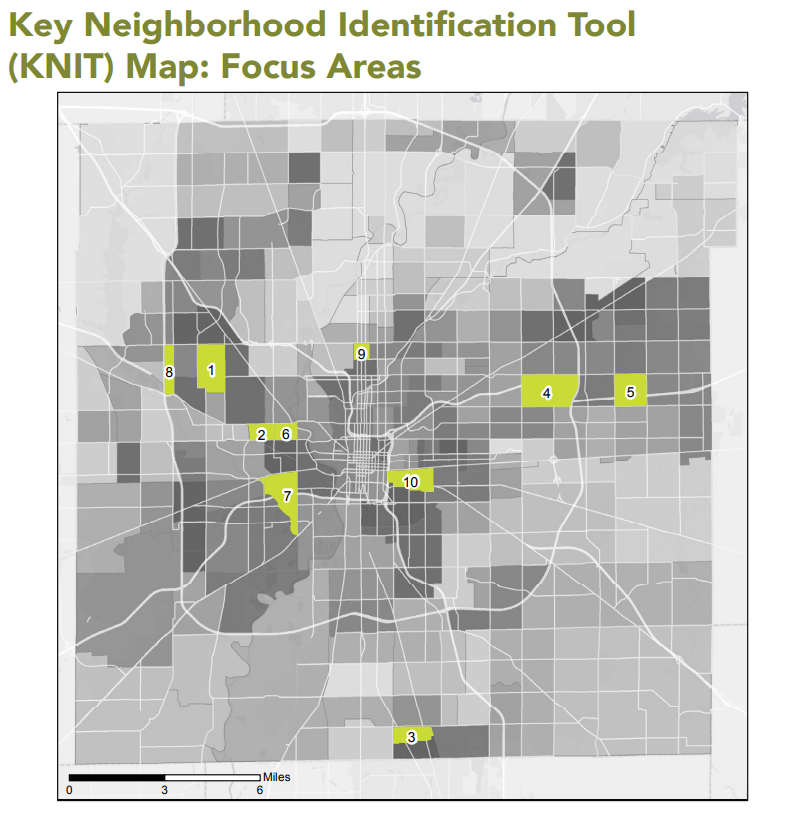