Purpose Park: Living Up to its Name

These days, when Danny Marquez looks out the front window of his Indianapolis home, he sees hope.

It wasn’t always that way.

“I used to look out the window and think, ‘God, there’s something wrong here. Kids were playing in muck piles. There was drug paraphernalia all over. Illegal dumping.”

Danny says he had a strong feeling that the vacant lot was meant to benefit the community. In his mind, he saw a place with raised vegetable beds. Benches where neighbors could meet and chat. Even public art. 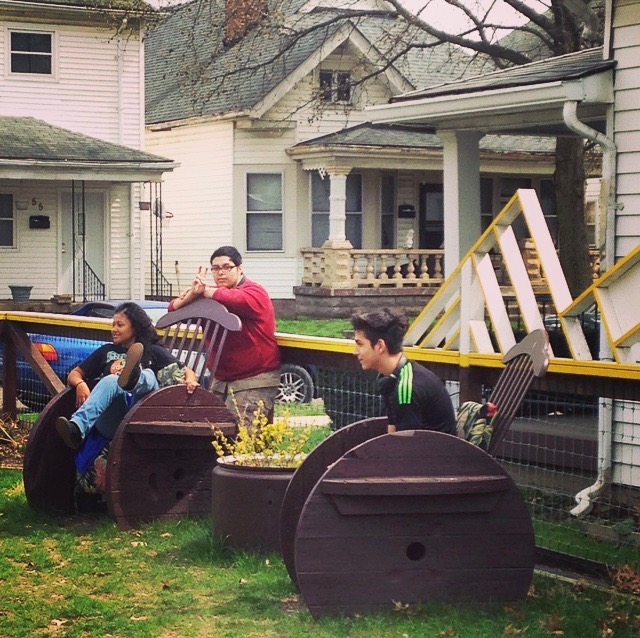 But thinking something and turning it into a reality are two different things. So he got to work.

The lot had been vacant ever since the abandoned house standing on the North Holmes Street lot burned in 2004. Danny, his wife, Amanda, and their three kids have lived across the street since he moved here from New York in 2012. He’d spent time in prison, after a rough youth and what he’ll admit were some terrible decisions. He was making a fresh start in a new city, and saw a way to make a difference.

But first, he had to track down the lot’s owner. After all, you can’t just start building benches and flowerbeds on somebody else’s property.

Danny learned the lot was owned by Hearts and Hands of Indiana, an organization that builds and rehabs old homes for families at risk of homelessness.  In this case, the non-profit saw the value of turning the lot into a park, so it transferred the deed to two neighbors Edwardo Luna and Emma Mahern, who supported the idea of a community green space.

Now, the challenge was money. Danny had seen a ‘built by KIB’ sign at another pocket park on the city’s eastside, so he contacted Keep Indianapolis Beautiful to learn how he might get funding for his dream. KIB urged him to collaborate with the Catholic Worker community, since its local headquarters is just north of the site.

Together, Danny and members of the Catholic Worker community, based in a nearby house, crafted a proposal. A grant from KIB covered a design by architect Wil D. Marquez of W/Purpose, plus project management by KIB staff members, who also helped source the building materials.

Sounds simple. But Danny will tell you: it took more than a year.

KIB provided some of the key design elements that transformed the space from a vacant lot to a neighborhood gathering spot, such as the native plants and trees, complementing a casita and a stone bench. 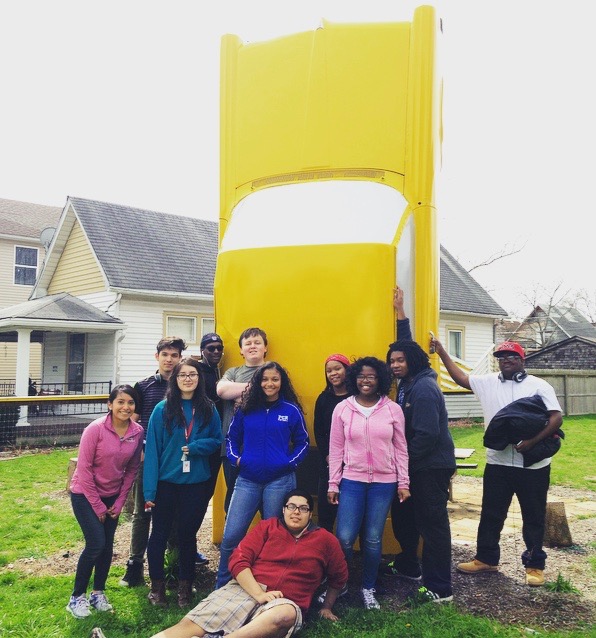 Now, the raised beds produce vegetables for the neighborhood. Native shrubs are covered with butterflies in late summer. There’s a fire ring, with stumps that serve as seating for campfires.

Even the park’s public art plays a role in community building.

KIB helped acquire and restore Purpose Park’s focal point: an upended ‘64 Pontiac Bonneville, nose down in the ground, near the park’s entrance. Just about every day, Danny says he sees folks stop and jump out of their cars to take a picture. The underside of the Bonneville has a smooth surface now, serving as an ideal projection screen for neighborhood movie nights.

Not long ago, the IMPD Chief of Police came with his leadership team to meet the neighbors and challenge some of the youngsters to a game of chess. Students who participate in Danny’s Youth for Christ program – his paid job – are often there after school, for City Life club meetings.

Now, when Danny Marquez looks out the window, he sees kids playing, while their parents sit on the benches and catch up on the neighborhood news.

He sees a safe, green and welcoming place: a place that began in his own imagination, and came to life because of his determination.

Stop by sometime. He’d love to tell you his story