Sister Angela Jarboe tiptoes into a garden bed, making sure not to step on the emerging crown of Black Eyed Susan. About eight feet in from the winding path of the Peace and Nature Garden, she spots what she’s looking for: a stick containing the husky egg sac of a praying mantis, right where she had tucked it into the dirt last fall. 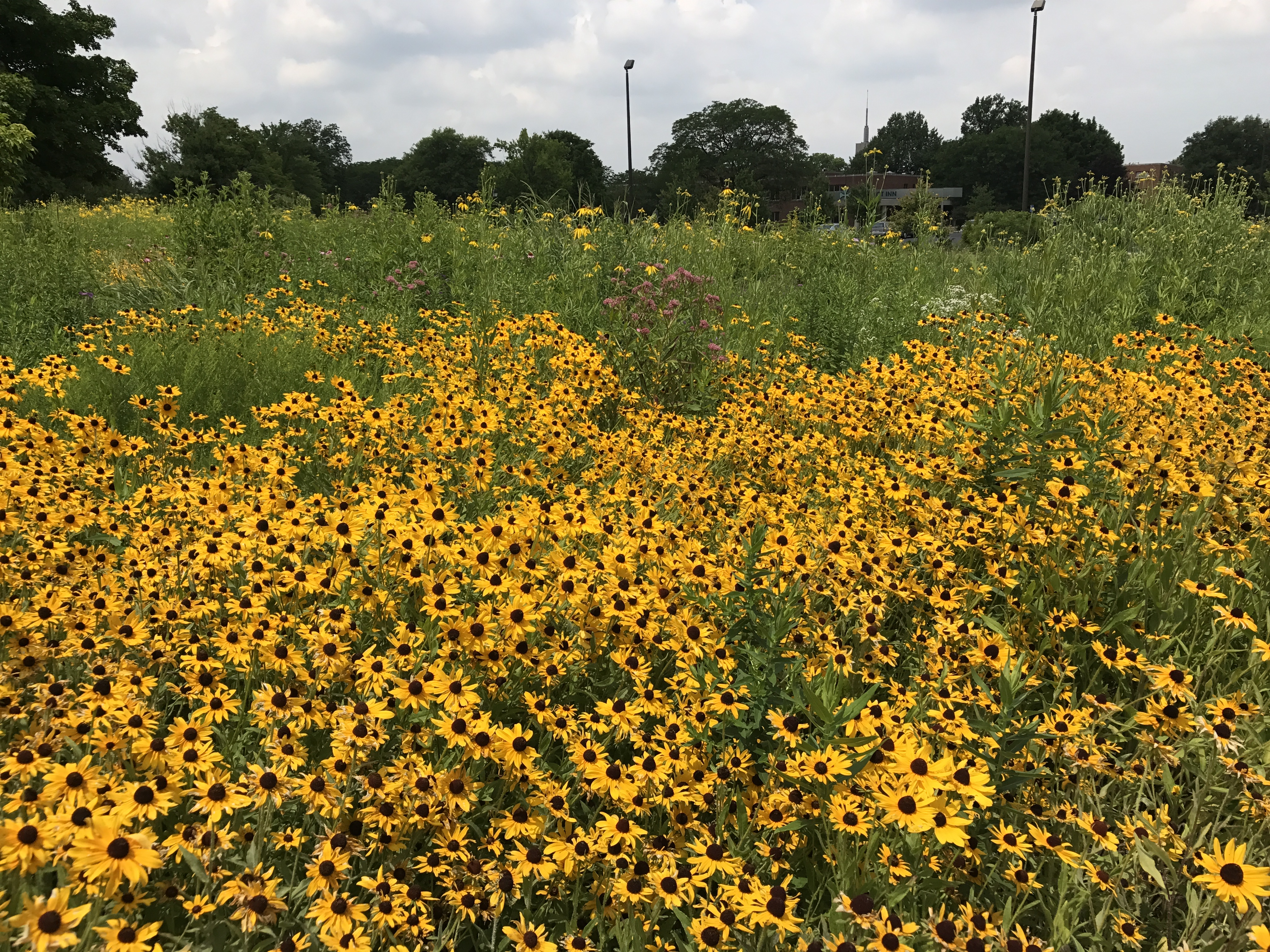 Sometime in June, between 100 and 200 tiny nymphs will hatch and quickly begin munching on garden pests such as aphids and fruit flies. They are a key component of her fellow gardeners’ commitment to native plants and organic practices that provide habitat for insects and birds.

If nature hates a vacuum, it loves a former parking lot. The Peace & Nature Garden is the happy result of a decision in 2010 by the Sisters at Our Lady of Grace Monastery to downsize their facilities and focus their energies on a retreat center offering space for contemplation and spiritual renewal. The Sisters worked with landscape architect Jeff Mader of Mader Design to create a master plan for the space, including reimagining how the vacated area would fit into the mission of the Benedict Inn Retreat & Conference Center.

Phase one involved demolishing the community center building that contained a gymnasium and pool. In its place, Mader proposed transforming the former parking lot into three acres of native prairie, featuring meandering paths and benches for contemplation. “They wanted the space to be green, both in its execution and its sustainability,” recalls Mader. “Their philosophy of engaging and welcoming the community informed a lot of the design decisions.” 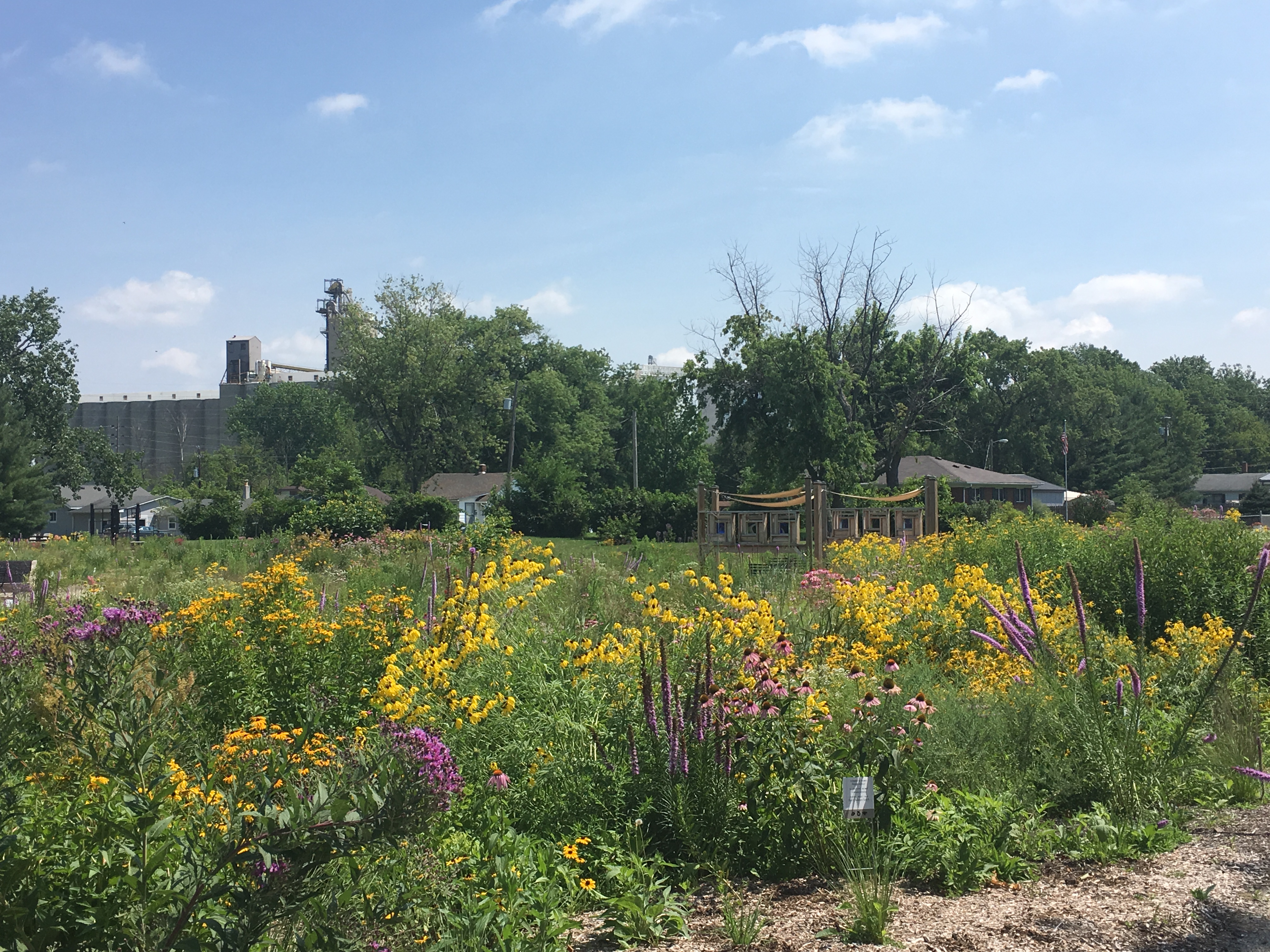 Mader, a member the KIB Board of Directors, suggested that the proposed garden, with its focus on native plants and community access, was an idea that Keep Indianapolis Beautiful would likely support. “I thought the garden project area would be a good fit for the IPL GreenSpace program, so I stepped aside, and urged them to apply,” he remembers.

Sister Sheila Fitzpatrick, Director of Facilities at Benedict Inn, recalls the application process. “It was very thorough – they wanted to make sure we had really thought through our whole project,” she said. “The questions were thought provoking: How will your community use this? How does this fit into your vision of who you are, enhance what it is you are about, and engage the community?”

“We wanted it to be a complement to the Retreat Center,” says Sister Sheila. “So that meant a meditative and peaceful place.” St. Benedict is tucked in a quiet Beech Grove neighborhood, with the St. Paul Hermitage nursing home nearby, so the paths needed to be navigable by neighbors who use a wheelchair or push a stroller. “There’s intentionally no fence or gate,” says Sister Sheila. “We’re just in their back yard.”

KIB approved the grant for the garden, committing the resources to design and construct the space. KIB’s Director of GreenSpace, Emily Wood, got to work, helping plan the garden’s construction. Using Jeff Mader’s design, she laid out the garden paths, defining the beds that would later be filled with native grasses and prairie plants. Sister Sheila enlisted the senior art class at nearby Roncalli High School to design outdoor sculptures that would add to the garden’s mood of contemplation and reflection.

But first, they had to kill the grass and weeds that had sprung up following removal of the gymnasium and parking lot. Beginning in the spring of 2014, volunteers covered the beds with sheets of newspaper and cardboard, blocking out the light to kill the existing vegetation without using harsh herbicides. Then the KIB Youth Tree Team arrived, planting 100 young trees: all native Indiana species that will thrive in the full sun of the site.

While the weeds were dying, Roncalli art teacher Mark Stratton designed sturdy garden benches, repurposing the old locker room’s marble changing room benches. “Often, guests in the garden will tell us they miss the old swimming pool that used to be on this site,” says Sister Angela. “I get a real kick out of telling them that least one part of the old pool is still with us.”  The finished design also features a Benedictine stone cross (designed by Linda Buckley, a Benedictine Oblate who is one of the regular gardeners) and columns with nature-related quotes by everyone from St. Francis to Anne Frank.

By late summer 2014, the weeds and grass were dead and it was time to plant. On October 3, several hundred volunteers from Lilly Day of Service, plus KIB staff and other volunteers, swooped in to plant 2200 plugs in one morning. “It was the most organized thing I’ve ever seen,” recalls Buckley. “They arrived around 9:30 that morning, and by 11:30, they were done. It was amazing!” Several weeks later, KIB volunteers returned to complete the installation, planting native shrubs that will provide berries and protection for birds, as well as design interest.

Now in its fourth year, the Peace & Nature Garden is flourishing: the native perennials are well established, and the gardening team has learned enough about the site’s drainage to move plants around to spots where they will thrive. (For examples, irises now populate the low spots that stay moist. Butterfly weed has been moved to drier areas.) “I’m glad I don’t have to haul hoses around anymore to water during dry spells,” says Sister Sheila, with some relief. 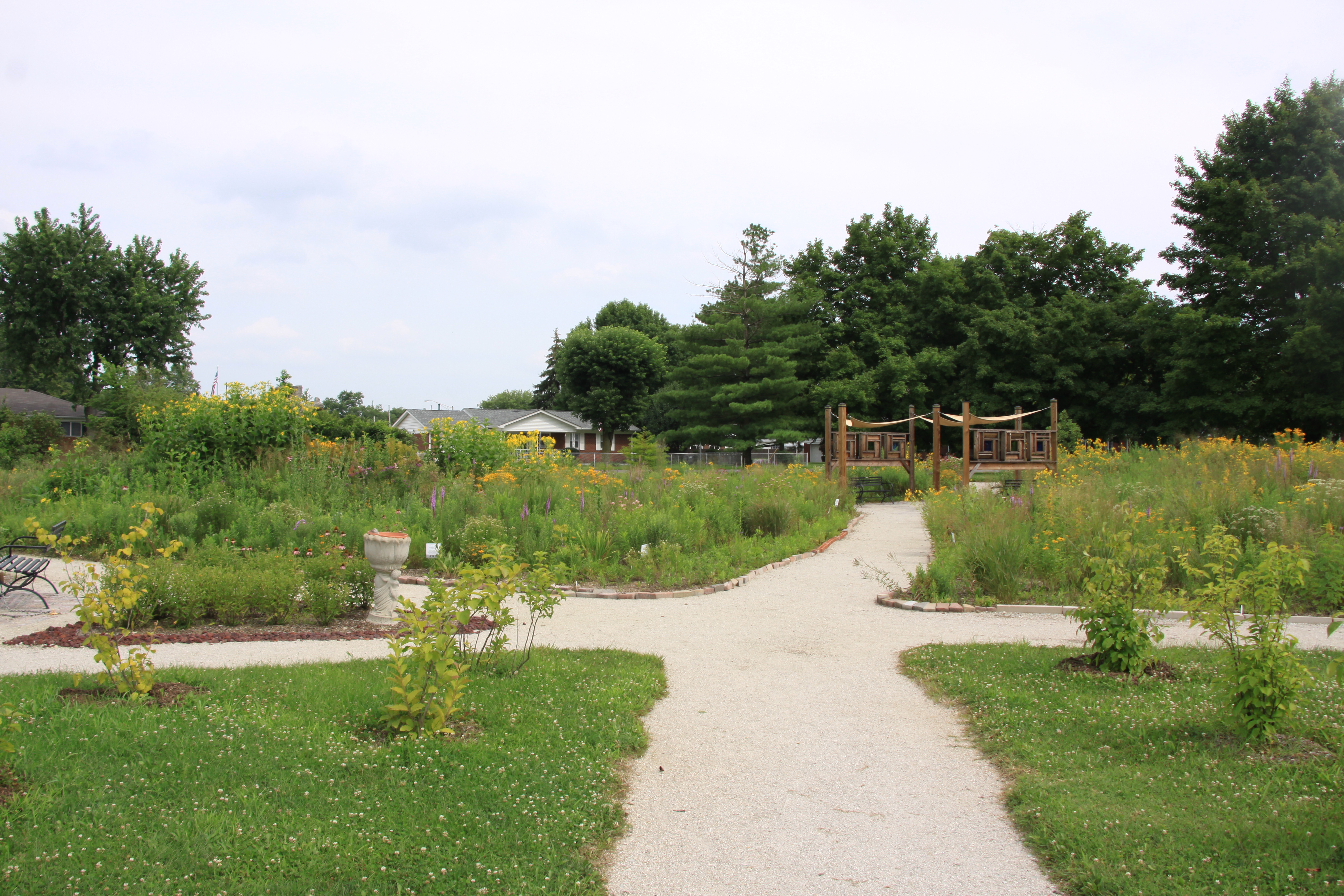 By mid-summer, the plants will be chin-high, blooming in a palette ranging from pale yellow to dark red, attracting bees and other pollinators as well as the full gamut of Indiana birds. “A few days ago, we even spotted a mockingbird in an old tree,” says Sister Angela.

In addition to the obelisks containing nature quotes (e.g. “Nature does not hurry, yet everything is accomplished.” Lao-Tzu), there’s now an area containing several benches and a shade structure constructed by a local Eagle Scout. The structure’s panes of stained glass glint blue and green on the path and plantings, moving through the garden as the sun crosses the sky. “We wanted to make the whole property a community-based park,” says Mader, “where people could come in and be engaged in nature and the spiritual aspect of themselves.”

On Thursday evenings through the spring and summer, Sister Angela leads garden walks for interested visitors and neighbors. But every day, she spots both regulars and newcomers enjoying the color and peaceful mood of the garden. “We asked KIB to help us create a space where people could come for a walk with their family – or a quiet stroll by themselves. We don’t charge any fee. Anyone can come. I now, when I see people out in the garden, I say to myself, ‘It’s working!’”