The near east side is an area of high crime, low income, low home ownership, abandoned houses, decaying sidewalks, litter, and high weeds. In 2006, a mass murder of a family of seven occurred. Despite this, homeowners are working to turn the area around. The City created a TIF District, with funds for public improvements. The new Great Indy Neighborhoods Initiative (GINI) was started; planning grants were awarded to this area and five others. In August 2006, the neighborhood applied for a grant for four pocket parks. These would create gathering places for neighbors, for them to meet and to work together to improve their neighborhood. 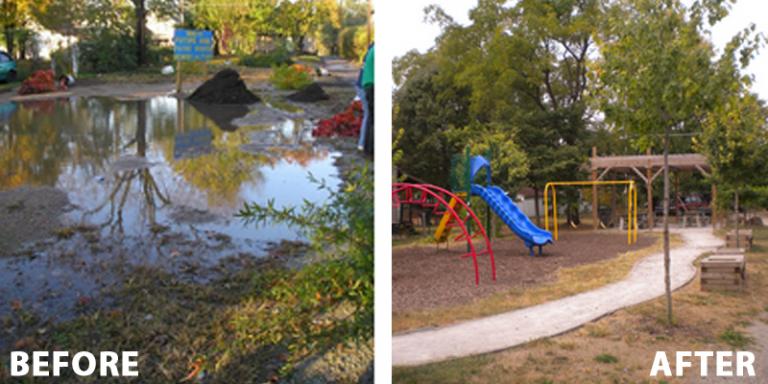 IMPORTANCE OF THIS PROJECT

This project will accomplish:

Construction began in March 2007, filling in the “lake” and building a shelter. The grantor supplied materials to neighbors who precut wood in their garages so the shelter would have more a decorative and finished look to it. Once the shelter was completed, they followed with a flagstone patio floor and a curving walk to the front of the park. The neighbors met every other Saturday and many weekdays to build the amenities of the park.

On the final construction day the playground pieces were assembled, with 48 volunteers showing up. They had succeeded, this tiny park had become a focal point, a place to gather, a flash of pride in a troubled neighborhood.

The grantor’s staff noted one amazing thing about this project and the neighborhood. Not only did the leadership engage the homeowners, young/old, long-term/newly arrived, white, black, and hispanic, all working together in the creation of this park, they also successfully involved nearby renters! Some of these renters are now taking responsibility for the monitoring and maintenance of the park. Dropping by in early July, the project manager watched some children drag their parents into the “new park”. While the kids played, the parents introduced each other, discovering that they lived only a block apart, but had not met before that day. Not only had they created a safe place for kids to walk to for play, but they had successfully created a vehicle for neighborhood interaction in a more welcoming place than the mini-mart at the end of the street.

This work is completed! Congratulations go not only to the neighbors, but to the organizations that donated money, materials, and/or volunteered to help build this magnificent little jewel, one of the best places in town that most will never see, but one that the neighborhood will enjoy and celebrate for a long time. Stop by and check out the greenspace for yourself!

Continued success of projects like this depends on our sponsors and individuals like you. Consider donating to Keep Indianapolis Beautiful.