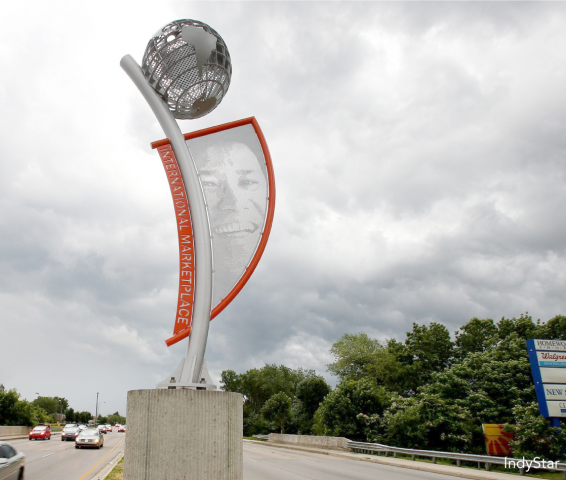 This week, I stayed in Pike Township off of Guion Road, which was an interesting mix of light industrial businesses and neighborhoods that looked and felt like the suburbs inside the city limits. As with many of the neighborhoods where I have been staying over the weeks, I wanted to learn how the neighborhood got its name and found out that Pike Township was named after Zebulon Pike. General Pike was a hero of the War of 1812, and also was an explorer after whom Pike’s Peak in Colorado is named.

I used my stay in this neighborhood to explore some new ground myself. I was close to the International Gateway off of 38th Street and Lafayette Road, and had a fantastic meal at Al-Rayan, a Yemeni restaurant located in a strip mall. There are also restaurants from India, Dubai, and markets with Halal foods (foods that are permitted for Muslims in the Qu’ran – similar to foods designated as kosher for Jews). The food choices were reminiscent of both Middle Eastern and African cuisine. There were even a number of options for goat! I chose a combination of roasted chicken and lamb over rice, with an amazing Yemeni bread called malawach, which is like a fried pita bread—perfect for scooping up the creamy hummus they served. It was heavenly. I heartily recommend it, but don’t go alone, like I did! Go with a group so you can order all the things on the menu and share!

Continuing on this theme, I sat down with Almera Mahmood, who sits on the board of the Indiana Muslim Alliance. We discussed the idea of bringing together Christians, Jews, Muslims, Hindus and Buddhists to do a tree planting, and then share the lessons from their respective spiritual texts about why it was important to respect nature and the world around us. We will be working on this more and more in the coming months at Keep Indianapolis Beautiful. What could be better after hearing something inspirational from a spiritual leader in your neighborhood than to pick up a shovel and plant a tree or pick up litter? It’s a perfect way to walk the talk. 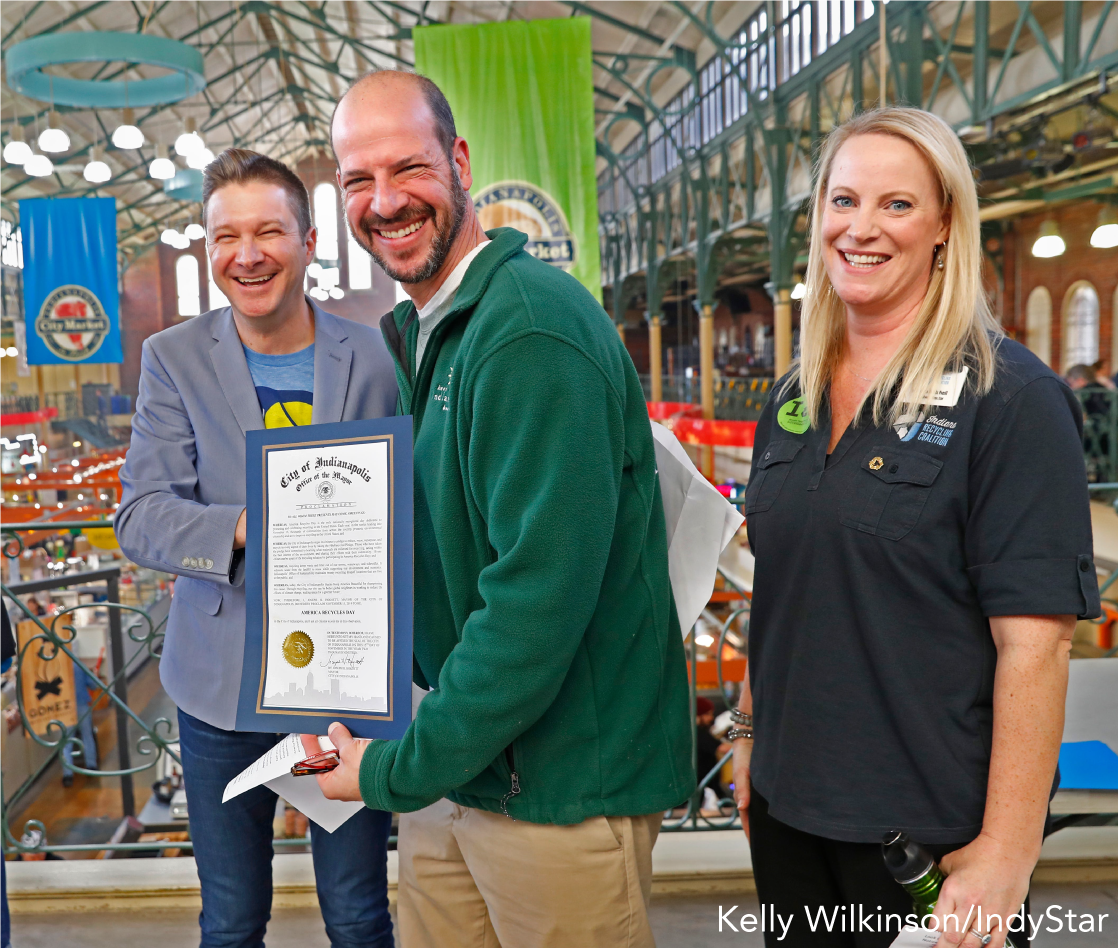 KIB also celebrated America Recycles Day with Deputy Mayor for Community Development, Jeff Bennett, and with Allyson Mitchell, Executive Director of the Indiana Recycling Coalition. Deputy Mayor Bennett made an official proclamation about the importance of recycling, which was handed to KIB to display.

But there’s more to do. Indianapolis has extremely low rates of recycling compared to other cities around the country. Part of the problem is that recycling is optional, and households have to pay $99 per year to have recyclable materials picked up curbside. I am moving to Indianapolis from a small city of 60,000 people in Connecticut. In my town, there are several trash haulers from which to choose, and actually having your *trash* picked up at the curb costs $50 per month! However, from that fee, my hauler also gives me a separate container where I can combine paper, metals and plastic in the same bin, and they are picked up, separated, and recycled into useful products that can reenter the economy.

Indianapolis has plans in place to get universal curbside pickup of recyclable materials by 2025. It can’t come soon enough. I can tell you that a LOT of the litter that KIB and our 15,000 volunteers pick up is composed of paper, aluminum cans, and plastic bottles and other recyclable goods. Imagine if it was easier to recycle all that—it might not just end up on the ground. Think how much prettier our city would be, and how much better you would feel walking along the litter-free sidewalks. What do you think? How can we get there faster? We want to hear from you, because #BeautifulNeedsYou.

Take a group to Al-Rayan and order EVERYTHING!

Find the best way that you can help increase the amount of recycling in Indianapolis!