Operation My Indy: Near East Side

It’s finally starting to feel like fall in Indianapolis! This week, my travels around the city took me to Spades Park Neighborhood near Brookside Parkway and Pogues Run Park. I stayed in a 100+ year-old home, with lots of original features, including original hardwood chestnut flooring! The wood from chestnut trees is straight-grained and highly rot resistant. For years, it was used in houses, fence posts, railroad ties, and for musical instruments! Chestnut trees used to number in the billions in the Eastern U.S., but the species was decimated in the early 20th century after accidental introduction of an Asian fungus in New York in 1904. By 1950, the American chestnut was mostly eliminated. At KIB, we work hard to remove invasive species because they destroy native habitats, and reintroduce plants native to the region. We work with volunteers around the city to help both people and nature thrive. 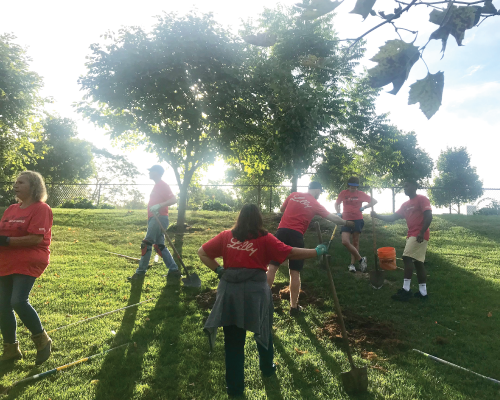 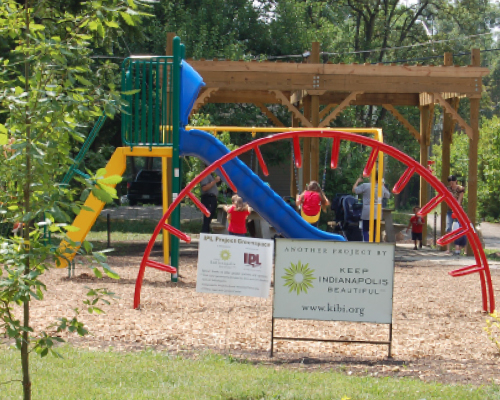 As I am finding in many neighborhoods, the Eastside is growing. I happily discovered the 10th Street Diner, which opened in May, and joined happy diners choosing from a variety of meat-free options at this vegan restaurant. I had a sandwich with seitan, an ancient meat substitute made from wheat. I highly recommend it … the food was delicious.

Did you know KIB has worked to create greenspaces with neighborhoods for over 20 years? I visited a pocket park that KIB created over a decade ago, the Paige Linn Booker Memorial Park (858 N. Parker Ave.) in the Rivoli Park Neighborhood. It was great to see the park thriving, with both opportunities to play and to sit and relax. I noticed the park did not have a trash can nearby, so I picked up litter that had accumulated using a spare bag I keep in my car. I disposed of the litter properly in the next trash can I saw. You can do this, too! We have a warehouse full of trash bags and gloves to share.

Saturday kicked off the fall Great Indy Cleanup (GIC) season in the Martindale-Brightwood and Hillsdale neighborhoods. Hundreds of amazing Hoosiers volunteered to help clean up litter and plant trees in places where community members wanted focused attention. KIB engages with diverse communities around the city, working on projects neighborhoods request. GIC is a prime example of that! We cleaned up used tires and couch cushions, we cleared sewer drains that were clogged with litter and weeds, we planted trees in front of homes and James Lowell School 51. We even had folks who came out of their homes to find out what was going on, and joined in the fun! We all have a role to play in making Indy beautiful. Clean streets and green neighborhoods don’t happen on their own, #BeautifulNeedsYou. (And when you’re out taking care of your community, tag us on social media with the #BeautifulNeedsYou hashtag or @kibiorg so we can share your work!)

Tune in next week to find out about my ongoing discovery of this great city. Some readers have suggested neighborhoods for me to explore, and I’m eager to follow up on those recommendations. Keep ‘em coming! 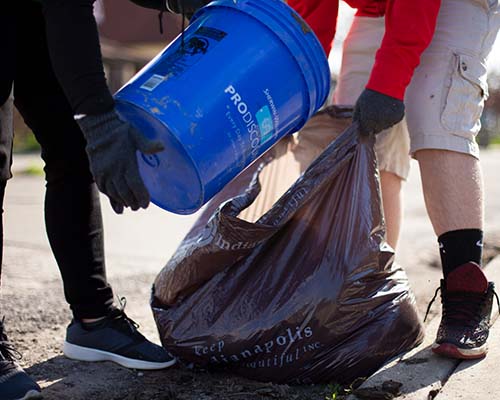