Chris Staab has lived on the Near East Side for more than 30 years. He’s been an Adopt-a-Block Captain since November 10, 2006! He says he puts in about 20 hours a week, picking up litter and helping neighbors take care of their property. He keeps an eye on a local pocket park that he helped develop as well, named in honor of a little girl who died at age 3 of a heart defect.

As co-chair of the Crime Reduction Code Enforcement Committee for NESCO, Chris works with city inspectors to walk the blocks and alleys of the Rivoli Park neighborhood. As a community volunteer, Chris can often approach neighbors as peers – and refer them to local resources that might help them with repairs that will bring their houses back into compliance. And he has the social capital to help the inspectors negotiate reasonable accommodations that help them achieve their goals, as well.

Partly as a result of those routine neighborhood walks, IMPD noticed that the crime rate was dropping in Staab’s territory. In 2015, Chris was named “Crimefighter of the Year” for his code enforcement work.

In 2017, IMPD and Mayor Hogsett set up community councils in each police district, to focus on reducing violent crime. They recruited Chris Staab to help lead the East District’s effort.

At the same time, he has gotten involved in the “Project Safe Neighborhood” efforts led by the U.S. Attorney’s office,  “My contention is that if you can keep yourself from being a victim, then you have reduced crime,“ he says.

He’s noticed two trends:
First, he believes that many of the crimes he’s aware of are committed by people who have run out of options. They’re trying to feed their family or take care of someone, and they don’t have the resources they need. Staab and others like him are able to connect people with support networks. Sometimes it’s as simple as the address of local food banks, including Gleaners, which provide high quality groceries to people living in food deserts.

Second, he’s noticed that there is more violent crime in neighborhoods where there are fewer Adopt-a-Block captains. In the Holy Cross neighborhood, where virtually every block is adopted, there is virtually no violent crime. While AAB wasn’t designed to be a crime-watch program, it has the effect of raising people’s awareness of who is in their neighborhoods, and when something ‘feels wrong.’ “These are the people who are picking up the litter, reporting the illegal dumping. They are the first line of defense, the ones who are most likely to ‘see something and say something,’” says Staab.

There are about 800 AAB captains, 100 of them on the Near East Side. Staab says they are great neighborhood resources: they know whom to call at the City County Building if they have a problem, whether it’s an old couch in the alley, or an abandoned house that needs to be boarded up more securely.

Staab says he’s proud of the way that KIB has partnered with groups in his area. “I think that if other neighborhoods are struggling, what I’d advise them to do is find one or two other folks, and sit down with KIB to talk about what projects might be helpful. I’d start with an Adopt-a-Block captain, maybe a Pocket Park. It made a huge difference in my area, I know that!” 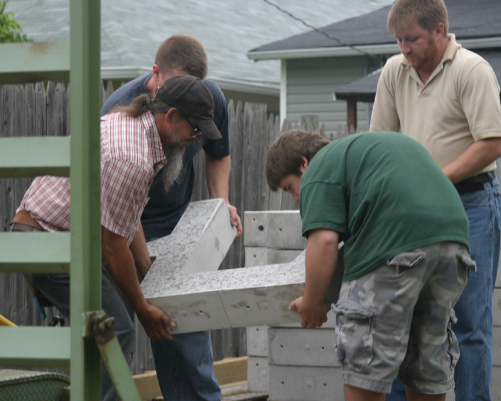