The Best Time To Plant a Tree: Twenty Years Ago

The Second Best Time: With Help from KIB and Your Neighbors

Sometimes, all it takes is one neighbor with a good idea. Of course, it helps if he (or she) has a bunch of friends. And beer.

Two years ago, one outdoorsy doctor had an idea: his street could use some more trees.

Now, a few years later, several blocks in Indy’s Butler Tarkington neighborhood are lined with Indiana native trees that will provide shade and beauty for this generation – and the next.

Peter Healy, DO, an IU Health emergency physician lives on Blue Ridge with his wife Cole and their two children. He was frustrated that when street trees had died, they had not been replaced. So, he reached out to Keep Indianapolis Beautiful.

The result was a project that both filled the gaps in the streetscape, and further built neighborhood camaraderie. It’s a good example of what KIB does – dozens of times a year – all over Indianapolis.

Nate Faris, Director of Community Forestry, says that the KIB Community Forestry Department leads volunteers in planting more than 3,600 trees every year. In spring 2018, there were 27 tree-planting projects in all corners of the city. This fall, another 27 projects are scheduled. (See kibi.org for ways to get involved.)

The planning for most tree-planting projects begins more than a year in advance, with an application process designed to ensure that there is neighborhood buy-in. “They asked for 15 signatures on the petition requesting the trees” recalls Healy. “I could see the point:  they wanted to make sure we’d have enough folks to get the planting done – and enough to help water them during the first two years.” The guidelines have relaxed a bit since then: three neighbors need to endorse a new proposal, and the Youth Tree Team handles watering for the first two years.

The two KIB arborists who visited Healy’s Butler-Tarkington neighborhood to scope out the project were not expecting the welcome they received: more than a dozen neighbors had joined Healy to explain their plans. “ This told us how serious they were about getting trees,” recalls Community Arborist Ned Brockmeyer. “Normally, we only meet with the project applicant and maybe one other person.”

Six months later, Healy received word that his proposal had been approved.  A planting date was scheduled: Earth Day, April 22, 2016.  Between when the project was green-lit and when planting day rolled around, the scope grew, with trees wrapping around the corner from Blue Ridge onto North Illinois.

On planting day, the same neighbors who’d signed the petition showed up, ready to work alongside a team of KIB Tree Tenders. The Healys provided sandwiches and beer, adding to the block-party atmosphere. Even neighbors who hadn’t originally been involved showed up with shovels. Recalls Brockmeyer, “They saw the planting happening and came out and asked to plant a tree with their children.” 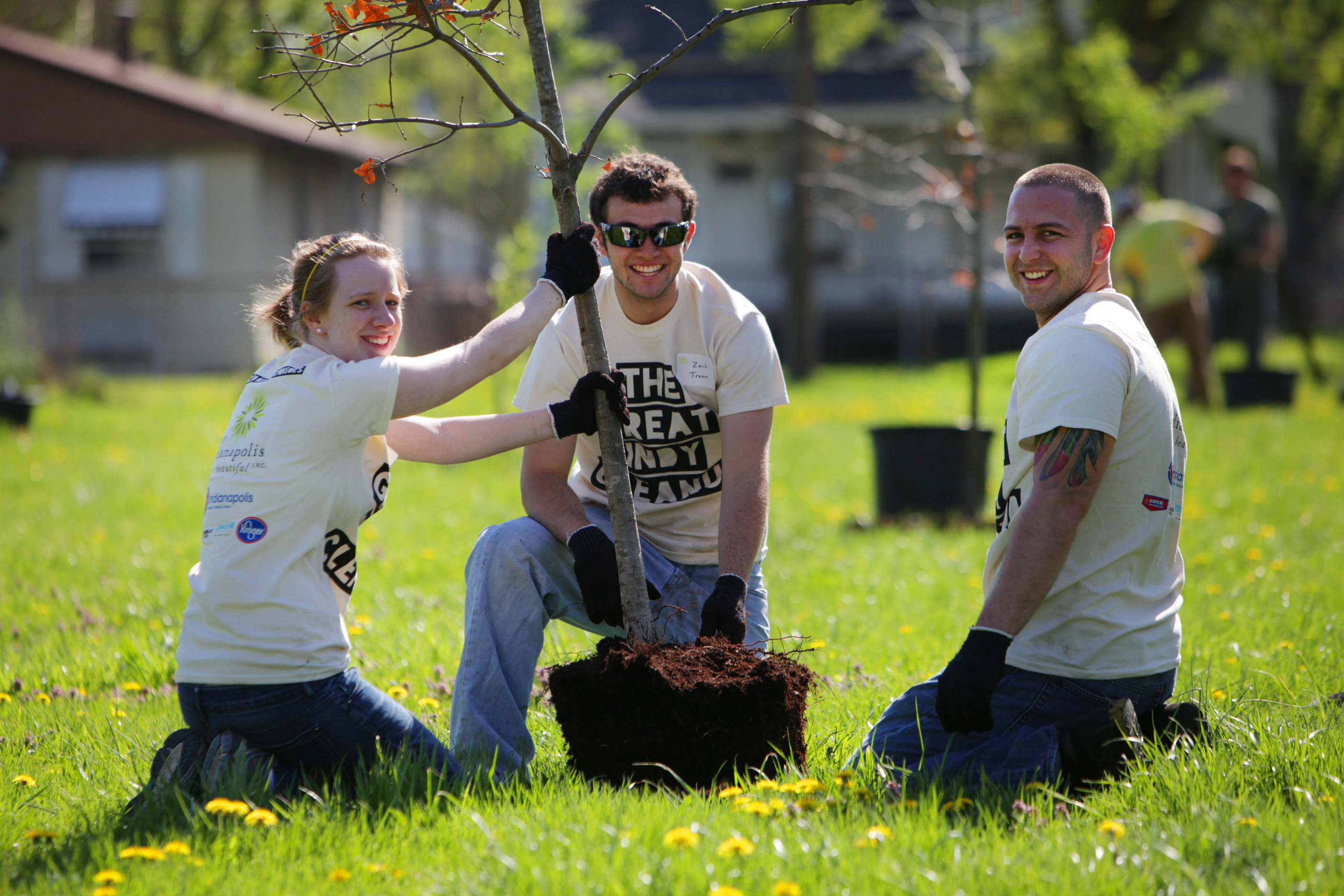 Together, the volunteers planted a total of 50 native trees: magnolia, bur oak, hawthorn, tulip trees, Kentucky coffee and others. In areas with overhead power lines, the KIB plan called for shorter trees such as Allegheny serviceberry, which only grow to 15’ to 20’ tall.  KIB supplied the trees, the mulch, tools and lessons in proper tree-planting techniques. No volcano mulching!

“Out of all the trees we planted,” recalls Healy, “only two didn’t survive the second year.” Arborist Ned Brockmeyer says that KIB replaced those trees, as it whenever possible when trees don’t survive the first year. Since then, neighbors and members of the KIB Youth Tree Team have made sure that the trees are watered regularly.

Now, two years later, growth is starting to take off. Kids walking to school this fall can point with pride to the trees they helped plant. And it won’t be too many years before they’ll be walking home – in shade.